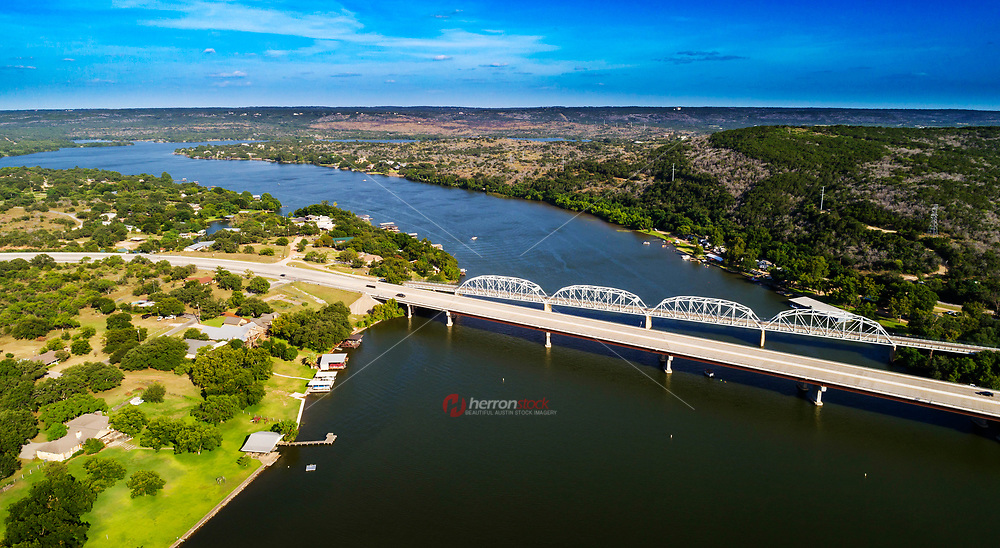 In this image you can see the old Inks Lake SH 29, Bridge next to the new bridge overlooking the pristine Inks Lake. is the next lake down the Colorado River from Lake Buchanan. It starts just a short distance from the base of Buchanan Dam. With a length of 4.2 miles and a width of 3,000 feet, Inks Lake is the shortest of the first four lakes but is also one of the most beautiful lakes in Texas.

State Highway 29 Bridge at the Colorado River is located in both Burnet and Llano counties in the U.S. state of Texas, between Buchanan Dam and Inks Lake . It is also known as Inks Lake Bridge, and was added to the National Register of Historic Places listings in both counties on October 10, 1996. The 1,379 ft truss bridge was planned by the Texas Highway Department in 1929. Construction was completed by the Austin Bridge Company in 1937 at a cost of $188,000. A new four-lane vehicular bridge was built in 2005, and the old SH 29 Bridge is currently open only to pedestrians.
© 2021 Herron Stock LLC; all rights reserved
Inks Lake, Texas
Authentic Austin, Texas stock images. View all galleries »
CONTACT